Give us a call at:

Or send us an email.

Finding a reliable and trustworthy chiropractor doesn't have to be a stressful experience.  Dr. Handly is board-certified and has a long-standing relationship with the community. 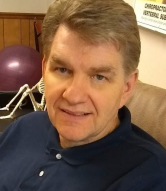 Dr. Handly was born and raised in Seattle, Washington. His father was a chiropractor who graduated from Palmer College and Dr. Don grew up under chiropractic care. His brother also became a chiropractor in 1973, following in his father's footsteps and graduated from Palmer Chiropractic College. After his brother started practicing, Dr. Don started to spend time with him at his clinic. Dr. Don's observation of Chiropractic, as explained and practiced by his brother, inspired him to pursue that field of education. He made a career change and left the police force in March of 1979 and moved to Atlanta where he attended Life University. While at Life he joined the Delta Sigma Chi fraternity and was a member of the Rugby team. He graduated from Life University in March of 1982 with his Chiropractic Degree.

After receiving his license in 1982, he moved back to Seattle and opened his practice. In October of 1983, he married Cynthia Haydu. She graduated from Life in December of 1982 and joined Dr. Don in practice in March of 1984. Together they have 3 children and 5 grandchildren, 3 dogs, and 6 chickens. They currently live in the very rural community of Snow Creek.

Since he began practicing, Dr. Handly has kept up to date on many continuing educational classes, ensuring that his patients receive the most comprehensive and advanced chiropractic care. He is also certified in Medical Acupuncture and offers this additional service to his patients. Dr. Don maintains certifications in Neuroemotional Technique and Bioenergy Synchronization Technique.

After 15 years of practice, they decided it was time for a change and since they had always loved the south, they moved to Collinsville, Virginia in September of 1997. He has been practicing in Collinsville for 22 years. Dr. Don and Cynthia also donate their time to the community in the capacity of  Advanced Life Support EMT's with local rescue squads.